The potential of applications of terahertz spectroscopy extends to various domains, including medical applications. We have conducted a study aiming at its possible use in conjunction with haemodialysis. Haemodialysis is a medical renal replacement method used in about a million patients worldwide. It is based on blood filtration, however, a reliable determination of the patients’ body hydration is still an unresolved problem. Determining the optimal amount of water to be removed during the dialysis procedure is important both in order to reduce unwanted side-effects and to achieve the most efficient treatment. Although there are some semi-quantitative methods (namely bioimpedance spectroscopy) providing hints in this direction, their reliability is still limited. Consequently, up to now, the amount of fluid to be removed during the haemodialysis process is strongly dependent on the physicians’ experience. In this situation, it appears useful to develop new methods providing an estimation of the body hydration state.

The THz radiation interacts strongly with water, and owing to its suitable wavelength, it can be used for imaging objects with a variable water contents including biological tissues. Several applications of this kind have been proposed and tested, the most of the effort being concentrated onto the diagnosis of malignant tissue. To our knowledge, no previous attempts to use THz radiation in conjunction with dialyzed persons were reported.

In our small-scale study [1, 2], based on our existing measurement setup for THz microscopy, we demonstrated measurable changes in measured spectral parameters with varying hydration. Our measurements revealed marked changes of the refractive index at the volar forearms during haemodialysis while much smaller changes at fingertips were recorded. However, the data collected in our measurements did not allow us to correlate the results with the actual body hydration state nor to identify the underlying mechanism which determines the measured THz refractive index of epidermis. 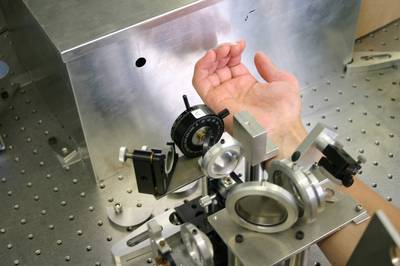